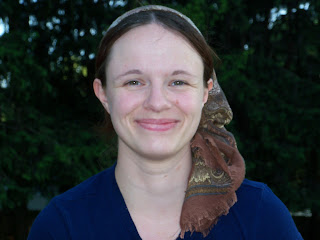 I'm posting these to share with the headcovering mamas thread on the Well-Trained Mind boards. I've been covering for five or six years now, usually with a scarf or bandana.
Posted by Doula! Liz Baer at 2:32 PM 5 comments:

Down a Slightly Different Path

As you all know, and have been reading about on my blog for the last couple of months, I applied and was accepted to midwifery school back in July, after having attended the Midwifery Today Conference in Oregon this April.

With Syracuse being as cold and snowy as it is, Tim Baer and I had tossed around the idea of moving somewhere else before our winter here hit. Honestly, I didn't think that anything would pop up and figured that we would be spending another winter digging out cars out every morning.

During the last week of July, I responded to a post on the Mothering.com discussion boards from a birth center in Oregon that was looking for a new apprentice, as their current apprentice was about to graduate. I talked to the midwife at the birth center and her apprentice and, in the second week of August, applied for the position. The last week of August, I got a "Yes, come on out" from the midwife at the birth center. Tim and I discussed it, prayed about it, and decided that this was the best course of action for our family at this time. I've always wanted to be a midwife, my husband is extremely supportive and I've been told time and again that I'll make a good one.

The kids and Tim are pretty excited. I go back and forth between being thrilled and terrified. Overall, I feel a peace about what we are doing. For as crazy as it sounds, I think that this is a long term investment in our family, me being able to have a career.

I have two more doula clients here in Syracuse and then I'll no longer be serving as a doula in the Syracuse area. I'll miss my clients here, whose future births I had hoped to attend. I'll miss the ladies in the Doula Connection, our young doula networking group. Both the families whose births I was able to be a part of and our doula group here will always hold a special place in my heart. I don't know when I'll see any of them again, as a trip to New York isn't in the forseeable future.

I'll no longer be "SyracuseDoula," but I can't imagine that I'll stop writing about birth and family. It'll just be from Oregon, as a midwife's apprentice.
Posted by Doula! Liz Baer at 12:07 AM 1 comment:

Last night at Panera, I managed to complete the Pelvimetry worksheet from Module Two of my midwifery school coursework. I read chapter 8 in Myles Textbook for Midwives, about structures of the pelvis and differences between pelvic types.
www.healthline.com describes the four types of pelvic types this way:
The bony pelvis has four general shapes, which may occur separately or in combination:

I think I've managed to piece together my weekend. Friday evening, Mandy Walters and I staffed our doula group's table at the Sweet Little Repeats consignment sale from about 3:30 to 8pm. We got to talk to a lot of moms. The theme Friday night seemed to be Cesarean and VBAC, and we ended up giving away all of the ICAN brochures that we had with us.

Friday night, I did not have to work at Walmart, so I was actually able to sleep from about 10pm to 4am. My intention was not to wake up at four, but working nights has done strange things to my sleep schedule. I alternated watching taped episodes of Juding Amy until about 7:30am, when I went back to the Sweet Little Repeats sale to hang out at the doula table with Chris Herrera. Got home around 5pm and did things around the house, napped, saw the family until 9pm, when I had to be at work at Walmart.

2:20am Sunday at Walmart, my phone rang and it was my doula client who was due Monday. I told her to try to rest and give me a call back soon and in half an hour I got another call from her saying that things were moving along. It ended up being a very quick birth of a gorgeous baby girl and I was back at our doula table at the consignment sale by 8:30am (and I didn't rush out after the birth, I stayed for a couple of hours after).

I got home Sunday afternoon around three, showered, went to bed and got up at seven o'clock this morning. I feel like I've recovered from the hours of sleep I missed over the weekend and, unless the lady due at the end of the month goes into labor, today is looking like it'll be a normal homeschooling mom/doing midwifery school homework sort of day. 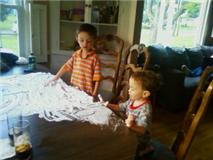 Tim did look at me funny for this one, but last night when the kids were whiny and sniping at each other, I emptied a can of shaving cream onto the dining room table and told them that it was time to practice writing letters. James has been doing 'M' this week in homeschooling, so he worked on 'M' and words that start with M. Delilah made the entire alphabet and Ben pretty much just played with the shaving cream. It was totally worth it, as it bought me twenty-five minutes of happy children and only took a minute to clean up.

In history, we finished up chapter one in Story of the World II. Both of the older kids read library books about Rome.

Patrick and Delilah both did lessons on www.time4learning.com in Math and Language Arts. I am really enjoying using the Memoria Press kindergarten with James. Honestly, the checkboxes are a big help to me.

We're headed out to the park this afternoon and then I'll be spending the weekend at the Sweet Little Repeats consignment sale. It's one of the biggest consignment sales in the area, with over 11,000 items this year. To find out more about it, you can go to www.sweetlittlerepeats.com

As a side note, I have been waiting for weeks for the copy of Women's Sexual Passages by Elizabeth Davis that I ordered from amazon and it still hasn't been shipped. If anyone has a copy I can borrow, please let me know.

Doula! Liz Baer
Lebanon, OR, United States
We're a homeschooling family with a student midwife for the mom and a lighting designer/musician dad.

View my complete profile
If you're in the Syracuse, NY or the surrounding area and are currently pregnant or considering another baby, send me an email or call me to learn about what a doula can do for you. I'm currently offering free in-person consultations and will hold your spot for up to one week while you decide if you want me to attend your birth.

After reading my blog, go check out...

Promote Your Page Too